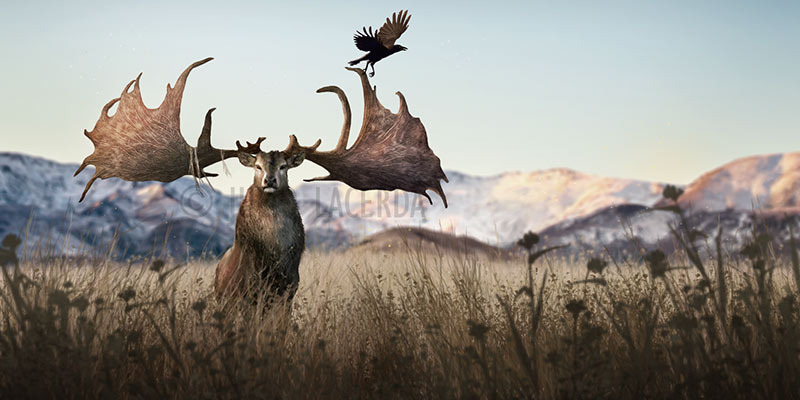 Giant deer were still present in Germany after Ice Age

All Posts
Scientists use DNA analysis on Megaloceros (or Irish Elk) bones to determine that the Giant Deer survived well past the peak of the Ice Age in Southern Germany.

The mass extinction at the end of the last Ice Age led to the disappearance of many animal species including the mammoth, the woolly rhinoceros, cave bears and the Megaloceros, also known as the giant deer or Irish elk, which could weigh as much as 700 kg (1,500 lbs). Scientists still do not fully know the precise reasons for the extinction of many species; it probably took place due to a combination of climate change and hunting by humans. However, some species of animals survived the end of the last glacial period somewhat longer than others. They include the giant deer, which populated huge areas of Eurasia during the Ice Age. These animals were still present in parts of north-western Europe after the Ice Age, before they finally disappeared about 7,000 years ago. Scientists at the University of Tübingen have now managed to isolate mitochondrial genomes (mtDNA) from deer bones found in the Swabian Alb that are 12,000 years old which sheds light on how prevalent these animals were in southern Germany.

The deer bones that have been examined were retrieved during excavations in the Hohle Fels and Hohlenstein-Stadel caves in the Swabian Alb. It was generally accepted that the giant deer had become extinct in this region and in the whole of Central Europe after the climax of the last Ice Age 20,000 years ago. Scientists initially believed that the findings were elk bones, as elks were widespread in southern Germany at that time. The reconstruction of the mtDNA by Johannes Krause and his team from the Institute for Archaeological Sciences in Tuebingen and the subsequent genetic analysis of the DNA have demonstrated, however, that the findings were bones from Megaloceros giganteus, the giant deer. "It's not easy to distinguish between an elk and a giant deer using the morphology of small bone fragments. There could be many more bones, which we previously attributed to the elk, but which really come from giant deer," says Johannes Krause.

Studies in the past did not provide any clear results about which of today's deer are the closest relatives of the giant deer either. The Tübingen scientists compiled a dataset from the mtDNA of 44 modern deer species and the two giant deer individuals dating from the late Ice Age in order to reconstruct a family tree. It emerged that the fallow deer is the closest living relative of the giant deer. This species originated in the Middle East and was introduced to Europe for hunting purposes in the 17th century. "It was speculated on the basis of the physical size that the red deer was most closely related to the giant deer; but we can clearly reject this hypothesis with our study," says Alexander Immel, a member of Krause's team.

The scientists also examined stable isotopes of the collagen, a structural protein, which forms an essential part of the bones. They compared the carbon-13 and nitrogen-15 values in the giant deer bones from the Swabian Alb caves with those of red deer, other giant deer and reindeer, which were living at the beginning and the end of the last glacial period. "Prior to the last Ice Age, there was a clear distinction in the isotope values for all three species; after this period, there is a clear overlap -- and this suggests that the habitat of deer species had shrunk or there was and overlap in the diets of the different deer species," says Dorothée Drucker from the Biogeology department, who examined the collagen.

The scientists believe that giant deers had to share their habitat and their food with other species of deer after the last Ice Age. In addition the antlers of the giant deer, which measured up to 3.4 meters (11 ft) across, were little suited to life in Europe, which was increasingly becoming forested. The competition with other species and additional hunting by humans likely affected the giant deer and finally led to the extinction of these imposing animals.

Reprinted from content provided by the University of Tübingen.