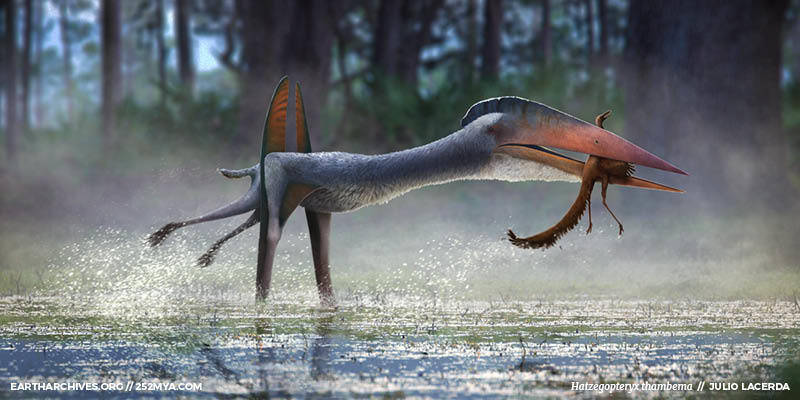 All Posts
During the late Cretaceous, Transylvania was an island that hosted one of the largest pterosaurs of all time. Now, scientists think that this giraffe-sized stork-like reptile might have also been the island’s arch-predator.

Millions of years before Transylvania became the stuff of blood-sucking nightmares, it was an island ruled by giant flying carnivores with a taste for dinosaur flesh. That island, known as Hațeg, was a sub-tropical landmass insulated by a deep ocean basin. The fossils of dinosaurs found there exhibit signs of island dwarfism. This means they grew much smaller than their mainland relatives, likely due to limited resources. The pterosaur Hatzegopteryx took a different evolutionary approach.

Hatzegopteryx is big. So big, in fact, that when paleontologists discovered its fossil remains back in 1991, they thought the fossils belonged to a theropod (a group of dinosaurs that includes the T. rex). The mistake was an easy one to make. Large theropods are much more common than large pterosaurs, and researchers were basing their assessment on only a few fossil fragments.

However, researchers soon realized their error. Unlikely as it seemed, they were looking at a pterosaur – one of the biggest pterosaurs of all time. Estimates of its dimensions put it up with the mighty Quetzalcoatlus. Paleontologists believe that its wingspan was up to 12 meters (40 ft) across, and its unusually robust skull was 3 meters (10 ft) in length. They have not yet found a full jaw, but believe it could be the longest jaw for any terrestrial tetrapod that has ever existed. 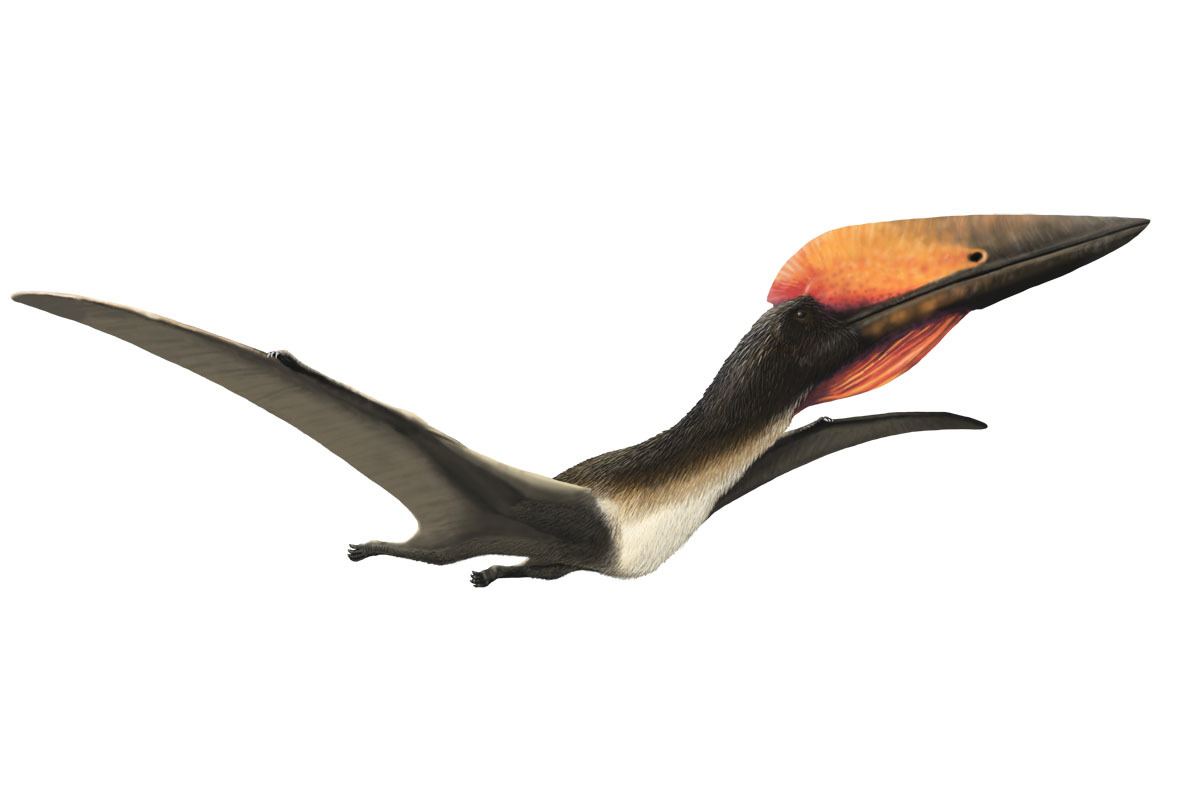 A reconstruction of Hatzegopteryx in flight
Nathan E. Rogers 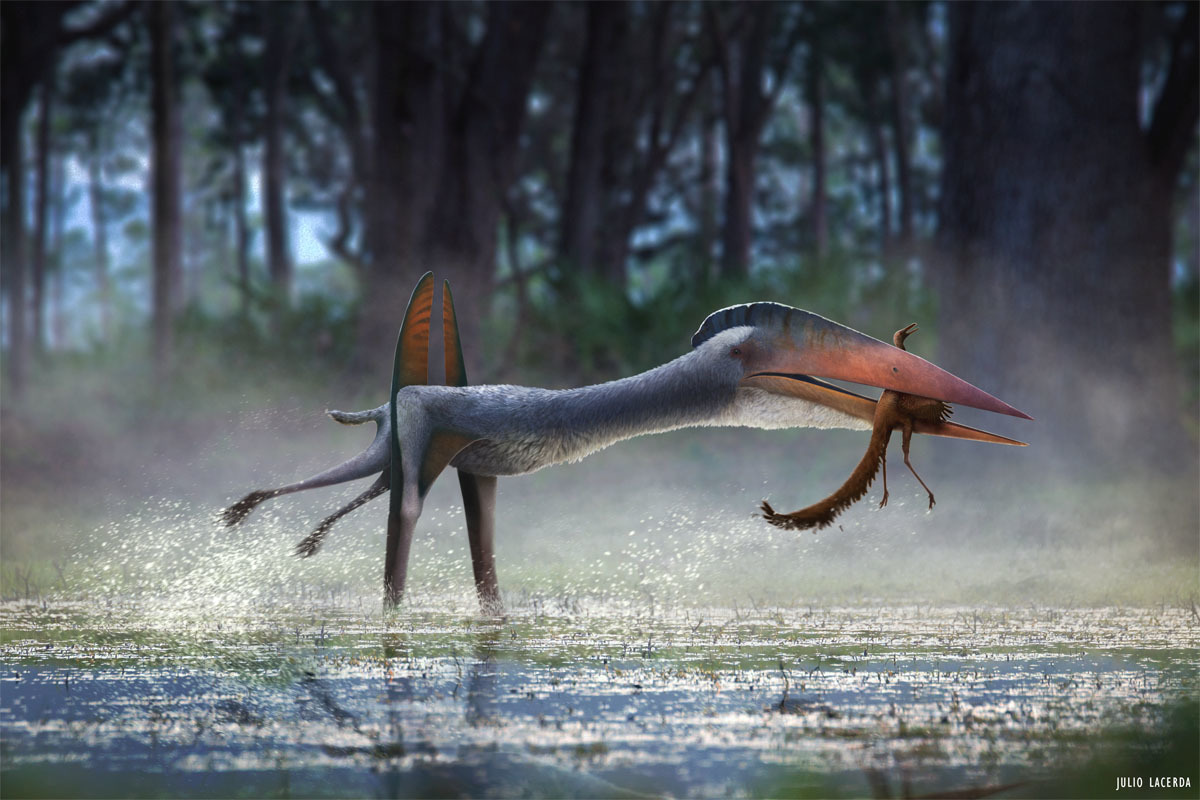 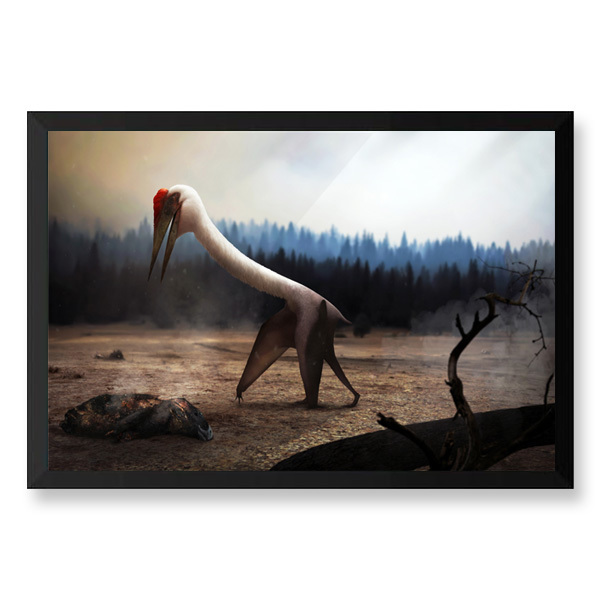 So, how was something so big managing to sustain itself on an island of small dinosaurs? At first, scientists estimated Hatzegopteryx eating habits based on what they knew about similar pterosaurs. Hatzegopteryx is a member of a group of pterosaurs known as azhdarchids. The name is fittingly derived from the Persian word “azhdar” which roughly translates to “dragon.” Common azhdarchid traits include elongated stork-like heads, long and delicate necks, relatively tiny bodies, and the power of flight.

Scientists originally thought this group of pterosaurs were simply scavengers, but the jaw shape didn’t quite fit the bill. The next theory was that they might skim-feed like pelicans, but this too looks unlikely. Now, researchers believe that azhdarchids’ size and shape would best put them in the category of “terrestrial stalker.” This means that they could fly, but preferred to hunt on the ground like a hornbill.

So if they hunted instead of scavenged, what did they hunt? Most pterosaurs likely hunted prey much smaller than themselves. They could not have competed with similarly-sized theropods, as their delicate necks and relative weight would have put them at a disadvantage. Hatzegopteryx, however, might be an exception to that rule. Without any large theropods to compete with, it might have developed a more aggressive hunting strategy.

In one of their publications, paleontologists Darren Naish and Mark Witton argued just that. They based their analysis on a single neck bone, which was assigned the specimen number EME 315. Turns out, paleontologists can tell quite a lot from one bone.

First, they predicted neck length based on the size of the bone and where in the neck they believed it came from. They found that the neck was much shorter than that of say, Quetzalcoatlus, despite the two species being similar in size. Next, they assessed the bending strength of EME 315, comparing it to the same neck bone of another large pterosaur. EME 315 was three times wider, but ten times stronger.

Hatzegopteryx is still the only creature discovered on the island with the size to take down large prey. Witton and Naish's research shows it also had head and neck muscles that could withstand a lot of force. Taken together, this means that Hatzegopteryx could have been capable of stabbing and bludgeoning sizable dinosaurs. Hațeg Island might have been the only place in the world where a pterosaur rose to the top of the food chain.

We're all familiar with the fantastical tale of Count Dracula in his Transylvanian castle – a tall man with a signature black cape, shape-shifting powers, and a taste for human blood. However, millions of years ago, there was a very real monster stalking the land. One as big as a giraffe, as angry as a shoebill stork, and as bizarre as a Jim Henson creation. One that towered over its island domain without a care in the world, except which dinosaur would become its next victim.