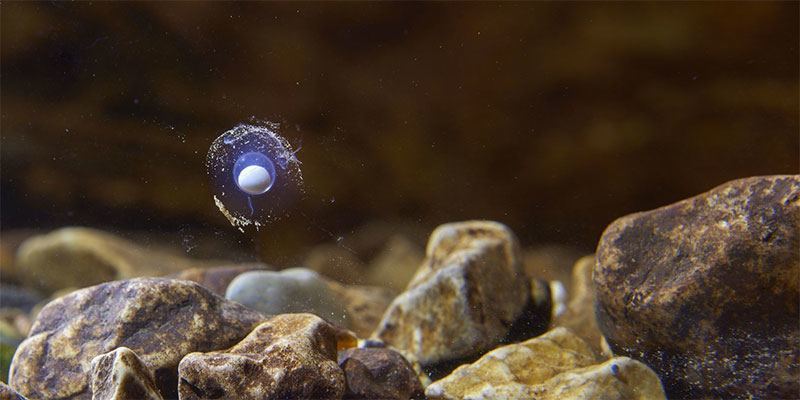 All Posts
The olm, the blind cave salamander of Southern Europe is one of the most interesting amphibians in the world. It is rare, pinkish-white and blind, and reproduces just once or twice a decade during its entire lifetime.

The olm, sometimes known as the proteus, or just the cave salamander, is a strange and seemingly delicate little creature that can live for nearly a century. It also breeds once every 10 to 20 years, so the very act of reproduction in Postonja Cave Park in Slovenia brought olms to front page news all over. Here, the spawning of these little “dragons” causes a great amount of excitement among both locals and tourists. One particular mother olm from Postonja’s dark depths has now laid a clutch of 50 to 60 eggs.

The spawning attracted the attention not only of the park’s resident scientists but also that of Dusan Jelic, a Zoological Society of London Edge Fellow who has been studying the amphibians and their habits for many years. According to Jelic and to other park workers, the laying of the eggs has been awaited for a long time, and many have been showing signs of growth in them. Three years ago, a mother olm laid a clutch of eggs, all of which were attacked by the other salamanders. This time, the park officials are taking precautions to ensure that nothing will happen and that all will go smoothly for her and her clutch. All the while, visitors can view the mother’s activities through an infrared camera. This separation is vital to protect both her and the brood. Jelic and park researchers like Primoz Gnezda and Saso Weldt explain that she and her eggs are vulnerable during the time it takes them to hatch. She broods her clutch, caring for them and nurturing them. Only time will tell if it will be a success or not.

The olm has been a vital part of Slovenian culture for centuries. For a long time it was thought to be a baby dragon, so its legendary status actually helped to spearhead the protection of this incredible animal. Its long, flexible body helps it to squeeze in between small gaps with the greatest of ease while its feathery gills help to filter oxygen out of the flowing water. Not only is it the world’s largest cave dweller, at 30 centimeters long but it is also Europe’s only subterranean vertebrate. The olm is the apex predator in a small and fragile environment that is normally shut off from the rest of the world. Postonja’s Vivarium Proteum, the aptly named olm preserve is also one of the birthplaces of speleobiology. This is the study of cave animals, and the olm exists among over 150 other creatures. They are almost all invertebrates, ranging from blind crabs and crayfish to specialized beetles and other insects. All of these invertebrates feature heavily on the olm’s menu.


Related Stories
Mimic poison frog tadpoles wiggle their tails to beg for food
Frogs beneath the clouds - the biodiversity of Cusuco National Park, Honduras
Compound found in contraceptives might turn male frogs into females
She hunts for aliens under the Baikal ice
Cougars survived Ice Age by eating almost anything
http://sulc.us/eze2v
http://www.eartharchives.org/articles/olm-eggs-tense-wait-for-baby-slovenian-dragons/