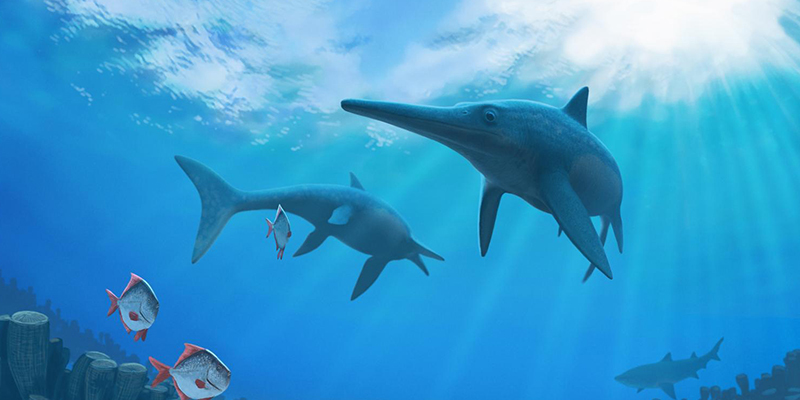 All Posts
For more than 100 million years, a group of fish-like reptiles called ichthyosaurs dwelled the oceans of the Mesozoic. They were among the earliest reptiles to dominate the seas when they diversified in the early Triassic.

Despite their success, the entire group declined steadily near the end of the Cretaceous. For no clear reason, they were all gone long before the mass extinction event that infamously wiped out most dinosaurs on land.

To shine a light on this enigmatic decline, a group of multi-national European researchers studied the diversity of ichthyosaurs and their ecology. According to the study, ichthyosaurs were actually well-adapted to various niches and evolved different body shapes before their eventual demise. However, the rate of their evolution considerably slowed down for a prolonged time, especially when compared to their diversification back in the Triassic.

This failure to adapt, combined with the instability of the environment, likely caused the group’s decline. By the end of the Jurassic, another group of marine reptiles known as plesiosaurs started pushing them aside. In the Late Cretaceous, specifically the Cenomanian age, an extinction event finished off ichthyosaur sub-groups that specialized on soft-bodied preys and the generalists. Only six million years later, at the end of the Cenomanian age, a second extinction event ended the large predatory ichthyosaurs. This two-step extinction event spared only a single group called Platypterygius, which also died out shortly after.

Dr. Valentin Fischer of the University of Liège, Belgium, and the University of Oxford, stated that although dramatic events such as meteorite impacts or volcanic activity were not to blame, rising temperatures and sea levels indirectly played a role in this story. Disruption in food availability, migratory routes, and birthing places likely drove the entire group to extinction.

During the brief period of time near the end of the Cretaceous, the absence of ichthyosaurs gave rise to various other unusual creatures. Numerous lineages of bony fishes and sharks evolved in response to the ecological changes and a group of of plesiosaurs grew slender necks longer than their bodies. The mosasaurs, related to modern monitor lizards, also rose to be the rulers of the seas during the last 20 million years of the Cretaceous.