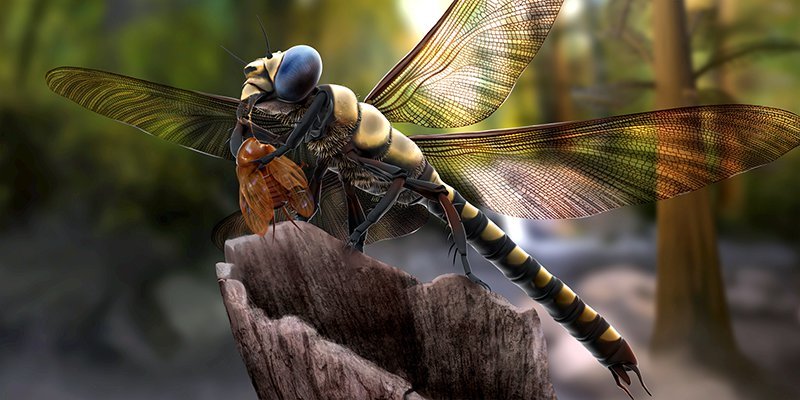 The biggest insect ever was a huge "dragonfly"

All Posts
The largest known insect of all time was a predator resembling a dragonfly but was only distantly related to them. Its name is Meganeuropsis, and it ruled the skies before pterosaurs, birds and bats had even evolved.

Most popular textbooks make mention of “giant dragonflies” that lived during the days before the dinosaurs. This is only partly true, for real dragonflies had still not evolved back then. Rather than being true dragonflies, they were the more primitive ‘griffinflies’ or Meganisopterans. Their fossil record is quite short. They lasted from the Late Carboniferous to the Late Permian, roughly 317 to 247 million years ago.

Meganisoptera is an extinct family of insects, all large and predatory and superficially like today’s odonatans, the dragonflies and damselflies. And the very largest of these was Meganeuropsis. It is known from two species, with the type species being the immense M.permiana. Meganeuropsis permiana, as its name suggests is from the Early Permian. Fossils of this huge insect were described by Frank Carpenter in 1939. The genus was scientifically described on the basis of a single incomplete wing fossil from Elmo, Kansas. Carpenter described a second species from Oklahoma named M.americana, a few years later. The wing fossil was, and still is, exhibited in the Museum of Comparative Zoology at Harvard University as part of the permanent exhibit.

From these two finds, and calculations of other griffinflies, it was estimated that Meganeuropsis had a body roughly 47 centimeters long, with a wingspan of 75 centimeters across. This is much wider than the South American damselfly Megaloprepus, the largest odonatan living today. Meganeuropsis was able to get this large possibly due to a far higher oxygen content in the atmosphere. During the Carboniferous, there was a massive influx in global oxygen levels and this allowed many land-living invertebrates to get to huge sizes. 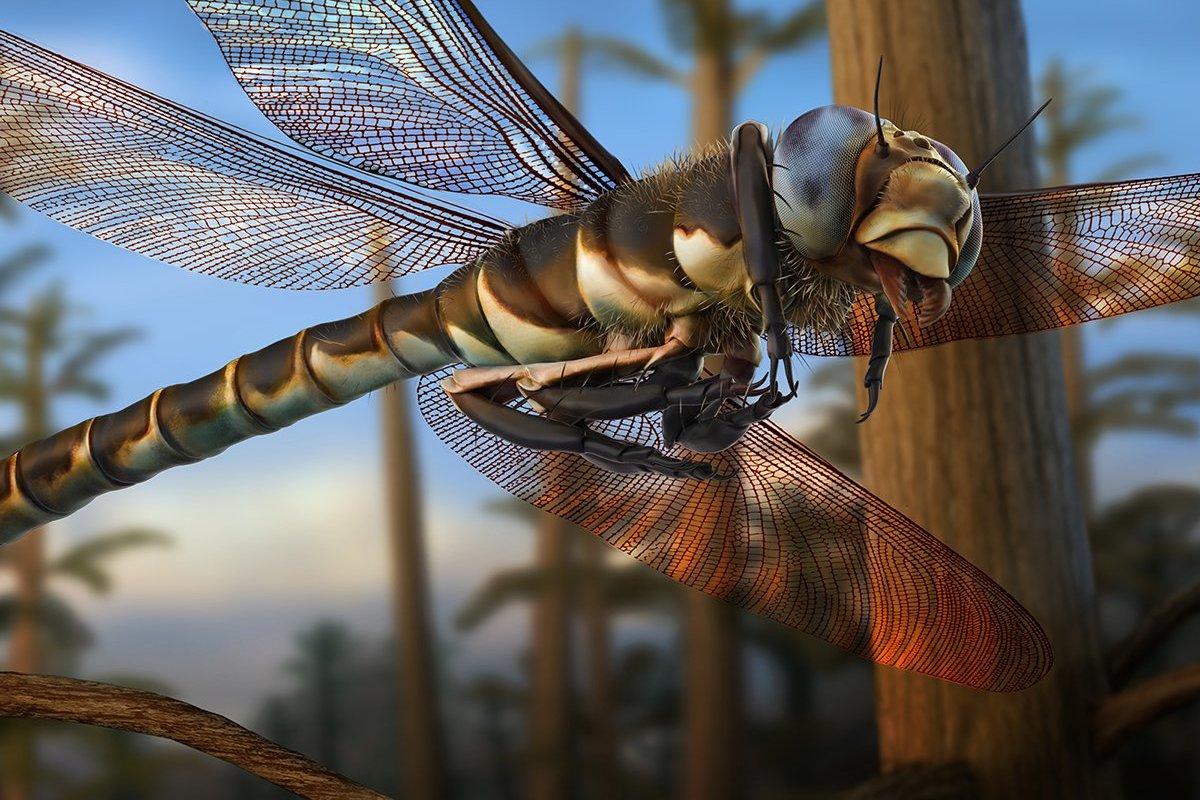 Meganeuropsis in flight
The giant griffinfly Meganeuropsis takes to the wing on a Permian morning.
Lucas Lima and Earth Archives 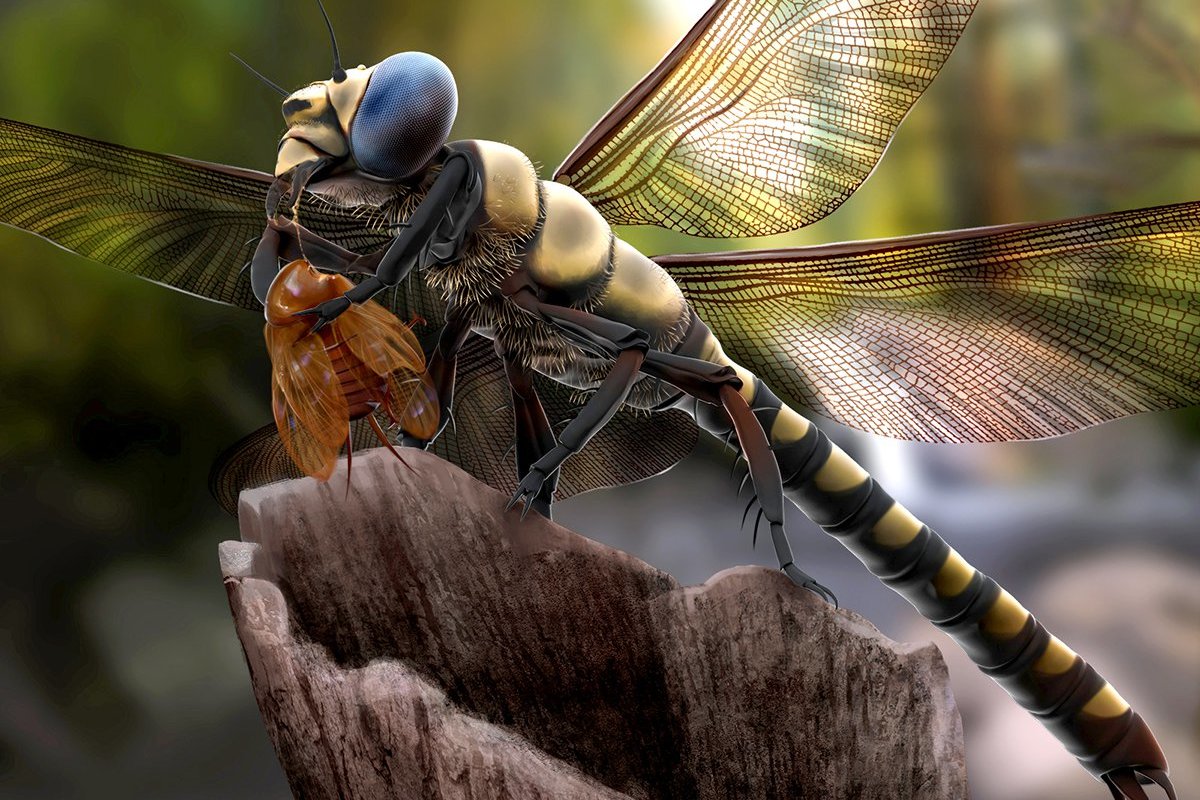 Meganeuropsis lunch
Meganeuropsis snacks on a giant cockroach that it has just caught.
Lucas Lima and Earth Archives

Insects breathe not through lungs but through a system of spiracles and narrow tracheal tubes. This fact, plus an external exoskeleton means that insects today have to stay small and cannot get to the same sizes of their ancient kin.

The ease of breathing may have allowed for much larger dimensions among many extinct insect families. The griffinflies were just one of them. Other contemporary insect families included the similarly huge Palaeodictyoptera and even roaches and roach-like insects. These primitive herbivorous insects were probably preyed upon by Meganeuropsis.

Meganeuropsis and its fellow griffinflies had a number of features suggesting a highly predaceous lifestyle. Among these was a pair of toothed and powerful mandibles for tackling large, struggling prey. They also had very spiny front limbs. Griffinflies were also possibly very maneuverable in the air, just as much as their living relatives are.

Fossil remains of nymphs show us that the baby griffinflies spent time in the water, just like those of modern odonatans. They too had powerful, grasping jaws to attack aquatic prey like fish, amphibian larvae and water insects. Meganeuropsis itself would have been preyed upon by its contemporary carnivores like the reptile and amphibian predators of the day, as well as primitive sharks and lobe-finned fish.

Meganeuropsis died out at the end of the Permian, victim of a mass extinction that wiped out more than 90 percent of all life on Earth. With this extinction, the high oxygen levels were gone, and no insect would ever reach their size.