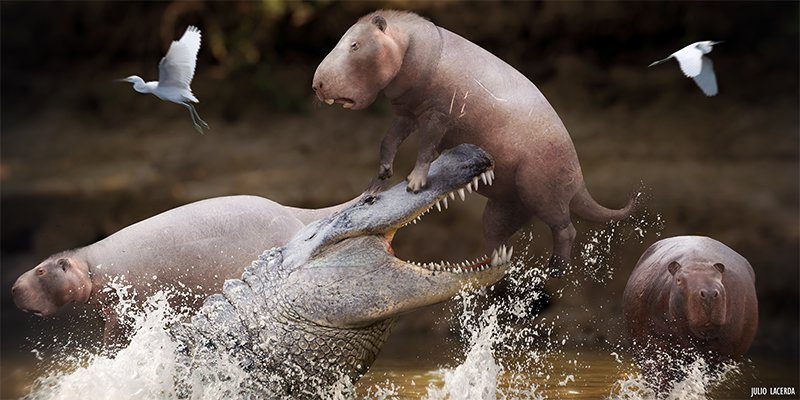 The crocodilian rulers of pre-Amazonian Peru

about 5 years ago by Robert Katz

All Posts
Seven crocodile species found in single 13-million-year-old bone bed reveal the diversity of Peru before the formation of the Amazon.

The Amazon Basin is associated with the highest biodiversity found anywhere on earth, as well as the largest stretch of rainforest on Earth. However, like all forests, it was once another ecosystem altogether, and these fossils from Peru give an insight into what the Amazon was like when it was a massive expanse of wetland.

The Pebas Mega-Wetland System was a one-million square kilometer tract of wetlands, rivers, ponds, lakes, and other freshwater habitats stretching from the Andes to the Caribbean. This seemingly endless stretch of wetlands and swamps, combined with a period of additional warmth in the already-warm Miocene period, roughly 13 million years ago, led to the evolution and diversification of reptiles, particularly crocodylians.

These reptiles were extremely successful in this prehistoric wetland system, and filled a variety of niches not seen in crocodylians today. Some attained enormous sizes, whereas others were on the scale of modern caimans and alligators. The largest animals in this ecosystem, and undoubtedly the largest reptiles on Earth at the time, were the tremendous Purussaurus, Mourasuchus, and Gryposuchus. These titans reached over 10 meters (33 feet) long each, but were built for different niches.

Purussaurus was a huge, blunt-nosed giant caiman, with a thick skull and jaws built for crushing bone. It is likely that Purussaurus would have preyed on the enormous turtle Stupendemys. Mourasuchus was an absolute oddball of a crocodile, with a long, flattened skull and very delicate jaws lined with tiny teeth – it seems, based on this morphology, that Mourasuchus was a huge filter-feeding crocodile, akin to a reptilian whale. It would have scooped up sediment and water, filtering out small fish and invertebrates through its teeth. Gryposuchus was a giant gharial, an enigmatic type of crocodylian only found in India today. It likely had a similar feeding strategy as well, using its long, slender jaws to snag fish.

In addition to these giants, a variety of markedly smaller crocodylians dwelled in the waterways of prehistoric Peru. A paper in 2015 reveals seven animals which contribute further to the highest diversity of crocodylians in one area at any point in Earth’s history. Three of these new taxa, Gnatusuchus pebasensis, Kuttanacaiman iquitosensis, and Caiman wannlangstoni, display a unique feature not seen in modern caimans: extremely short, blunt, rounded teeth.

These teeth are perfect for cracking open the shells of mollusks such as clams and mussels, and the abundance of shellfish in this ecosystem reinforces the notion that these caimans were specialist bivalve-eaters. In addition to their teeth, these caimans had rounded, flattened skulls which would have assisted in digging in soft sediment in search of their prey. Round toothed animals adapted to eating hard-shelled prey are known as “durophagous,”(hard-eating), and the only other caimans with durophagous dentition are known from the latest Cretaceous and early Paleogene. It appears that the durophagous caimans from Peru are more ancestral than the more derived modern caimans, as well as the giants mentioned above. Its diet is an ancestral characteristic of all caimans, and that the Peruvian taxa preserve this feature.

Living alongside these taxa was also a species of Paleosuchus – a genus of caiman that has survived to modern times. It is represented today by the Cuvier’s dwarf and smooth-fronted caimans. Paleosuchus, unlike the durophagous caimans, has sharper, more conical teeth suited for capturing fish other relatively softer prey. This bolsters the theory that not only was there enough space in this ecosystem for a multitude of caimans, but it suggests that there was a diversity of prey items that allowed such different adaptations to thrive.

The discovery of this diverse assemblage of caimans helps paint a more complete picture of the Amazon Basin before either the rainforest or the river had formed. It seems that this region of South America has been the home of a huge diversity of animals for at least the past thirteen million years, though the environment and its ecosystems have changed dramatically.


Related Stories
The giant sloths that lived in the sea
Komodo dragon's extinct cousin from Athens
Where did snakes come from?
Oldest known snakes found in museum drawers
The giant penguin with strange colors
http://sulc.us/g03ho
http://www.eartharchives.org/articles/the-crocodilian-rulers-of-pre-amazonian-peru/