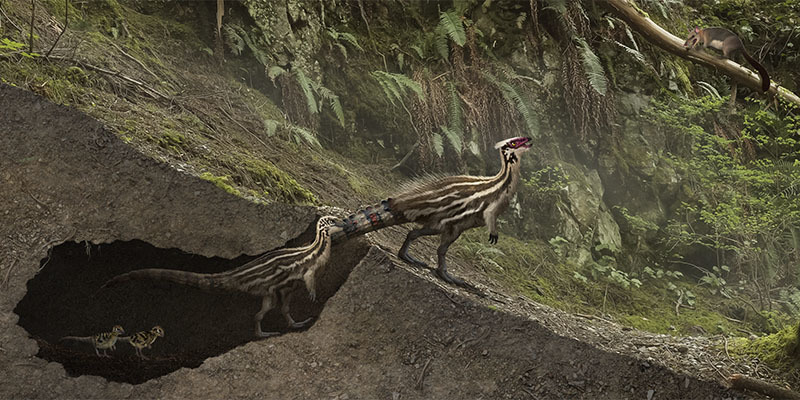 The dinosaurs that dug their own grave

All Posts
Recent discoveries in Montana and Idaho have uncovered a previously unknown behavior in dinosaurs: digging. These creatures, known as orodromines, had robust and muscular arms, shoulders, and hips that were well-suited to digging out burrows. Fossil remains of adults and juveniles suggest that these peculiar dinosaurs took care of their young.

For most of the Cretaceous Period, North America was home to a family of small, plant-eating dinosaurs known as the orodromines. They may have resembled the modern-day wallabies of Australia but actually walked and ran like ground birds instead of hopping. They would have been around the same size, too.

They’re also the only lineage of dinosaurs known to live in underground burrows.

Several kinds of small-bodied mammals like rabbits, prairie dogs, and meerkats live in burrows with family members today, but so far orodromines are the only known dinosaurs with a similar lifestyle. Like their mammalian counterparts, orodromines appear to have been social animals living with family members in burrows to guard against the elements and protect against predators. 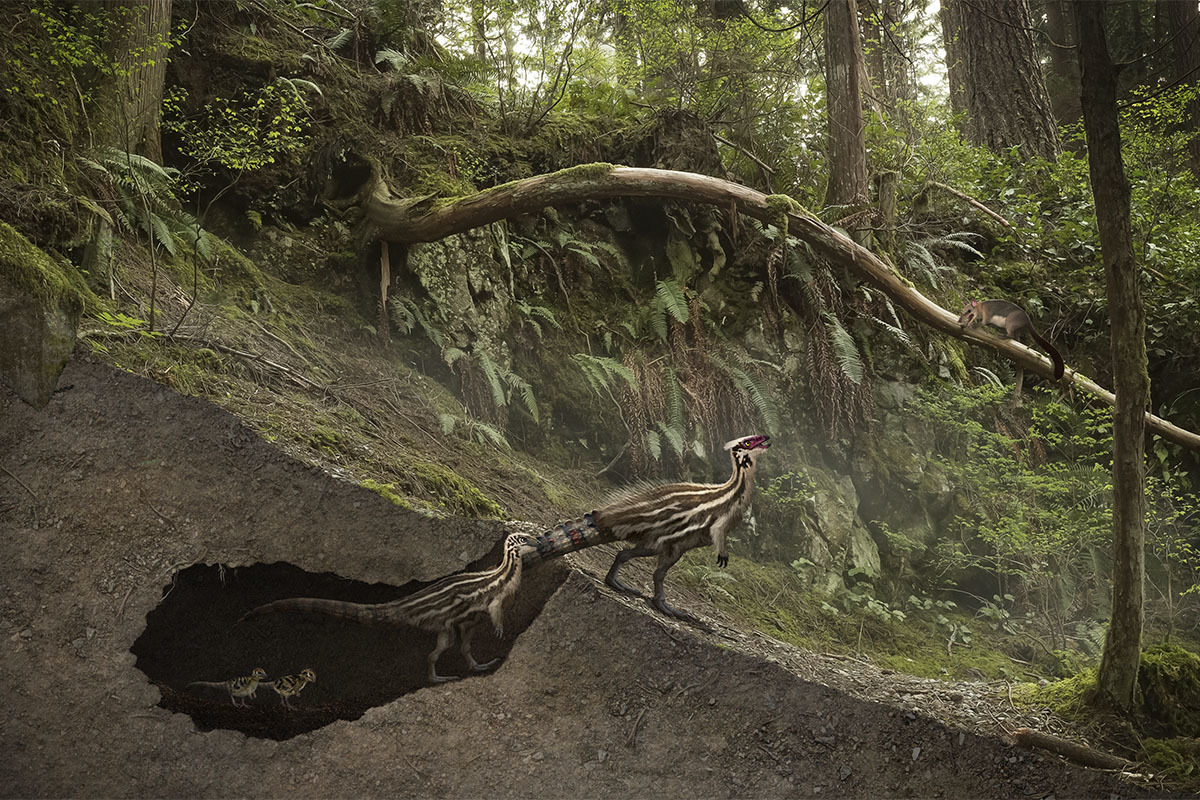 Orodromeus is similar to the small running dinosaurs known informally as “hypsilophodonts,” but it had a number of strange features that showed its arms and shoulders were extremely muscular, and the hips extra sturdy.

The weird anatomy remained a mystery until a close relative called Oryctodromeus was discovered. To the scientists’ surprise, the dinosaurs died in burrows that they had dug and lived in.

Skeletons of adults and juveniles of Oryctodromeus were first discovered in a sand-filled tunnel that cut through mudstone layers of the Blackleaf Formation in Montana. The tunnels are roughly two meters (6.5 feet) long and have two 90° bends to the left and right near the middle. The animals dug the burrows into soft sediments over 95 million years ago. Since that time the skeletons and burrows were buried, fossilized, and subsequently exposed at the surface.

Oryctodromeus had the same unusual shoulder and hip anatomy seen in Orodromeus. The paleontologists who named the species realized the strong and muscular arms and shoulders were adapted for digging. Likewise, an extra pelvis-backbone connection helped strengthen the hips while digging with the hindlimbs.

Earth Archives spoke to Dave Varricchio, one of the paleontologists who first discovered Oryctodromeus. Recounting the initial discovery of the burrows, Varricchio said, “They first puzzled us. We thought the bones were in a concretion. But on digging we could not make sense of the bone distribution. Small bones occurred above larger ones in what seemed a stacked arrangement.”

The anatomical peculiarities of Oryctodromeus were discovered later when the specimens were brought back to the lab to be freed from the surrounding rock. Varricchio explained, “When the unusual anatomical features were revealed, it was more of a “Woah!! Check it out!!” moment.” In short, the burrows were occupied by animals that certainly could have dug them.

Oryctodromeus burrows are also known from the neighboring state of Idaho. Many of these remains have been discovered and described by L.J. Krumenacker. In an interview with Earth Archives, Krumenacker spoke about his work on Oryctodromeus, “It is the first described burrowing dinosaur, with multiple specimens having been found in burrows, and there is the strong possibility that many other of the specimens were recovered from unrecognized burrows. Before the description of this animal it was thought that dinosaurs had never filled the niche of burrowing animals.”

But more than showing us that some dinosaurs burrowed, the burrows tell us about the family life of Oryctodromeus and its relatives. Krumenacker continued, “Oryctodromeus is often found in groups of multiple individuals, including occurrences of presumed parents and juveniles. This shows these animals cared for their young and lived in social groups.”

Although most Rocky Mountain states were home to dozens of known dinosaur species, Idaho is not among them. Krumenacker explained, “Where dinosaur-producing rocks exist in Idaho about 99.9% of them are heavily covered by grass, trees, and sagebrush. You do not have long stretches of badland exposures such as those in Utah and Montana. In Idaho one has to follow creeks and small drainages looking for occasional small rock outcrops.”

Even without the vegetation issue, conditions in Idaho may not have been ideal for preserving large dinosaur skeletons. Krumenacker continued, “Ancient environments of Idaho did not have enough sediment input to bury large dinosaurs quickly enough for them to be typically preserved. The fact that Oryctodromeus burrowed may be the reason it is so common, it was essentially burying itself for future preservation.”

“Oryctodromeus is by far the most common dinosaur known from Idaho and southwestern Montana, and the presence of a small bodied animal (usually rare in the fossil record) suggests unusual preservational circumstances in these ancient environments. This is possibly again related to its burrowing behavior,” he concluded.

In addition to Orodromeus and Oryctodromeus, several other species have been discovered. The Lower Cretaceous Cloverly Formation of Montana was home to the earliest known and first-discovered orodromine, Zephyrosaurus. It lived alongside its large bison-like cousin Tenontosaurus and the famous dromaeosaur Deinonychus. Albertadromeus is known from the Oldman Formation in Alberta and an unnamed species from the Kaiparowits Formation in Utah, both living about the same time as Orodromeus.

The only possible orodromine known from outside of North America is Koreanosaurus, from Upper Cretaceous rocks in South Korea. Koreanosaurus is like its American cousins having extremely strong and muscular arms and shoulders, but in some respects was even more well-adapted to digging. Earth Archives spoke with Pascal Godefroit, one of the describers of Koreanosaurus who said, “The most striking character seems to be its ‘hypertrophied’ forelimbs, which were maybe even larger than its hind limbs. A character unique amongst dinosaurs!” Godefroit continued, “Among orodromines, Koreanosaurus is unique in the elongation of its cervical vertebrae,” indicating an animal with an unusually long neck.

Orodromines may have been even more widespread. Several sand-filled burrows with an almost identical shape to those in Oryctodromeus have been discovered in Lower Cretaceous rocks in Victoria, Australia. At the time the burrows were made, Victoria was near the South Pole and was home to an unusually large number of hypsilophodont species. So far there are no known orodromines from Australia, or any species with adaptations for digging.

Although several species are known, there are only a few known fossilized burrows. Many burrows were presumably dug into soils which were often eroded without a trace, or completely turned over by the action of plant roots. Only those soils that are buried and become part of the rock record, known as paleosols, can possibly preserve the fossil burrows. Godefroit explained, “The preservation of well-articulated and three-dimensional skeletons in palaeosol deposits implies that the animal had to be buried very quickly just after its death or even that accidental burying was the cause of its death.”

Most of the orodromine species, including Oryctodromeus and its burrows, were discovered in the 21st century. These recent discoveries have uncovered a completely unknown behavior in dinosaurs so that we can now imagine these social, burrow-dwelling dinosaurs as a common element in most Cretaceous environments in North America and possibly far beyond. Furthermore, these discoveries show that after 150 years of intense prospecting, dinosaur-bearing rocks in western North America are still offering up surprises, and may still surprise us in the future.