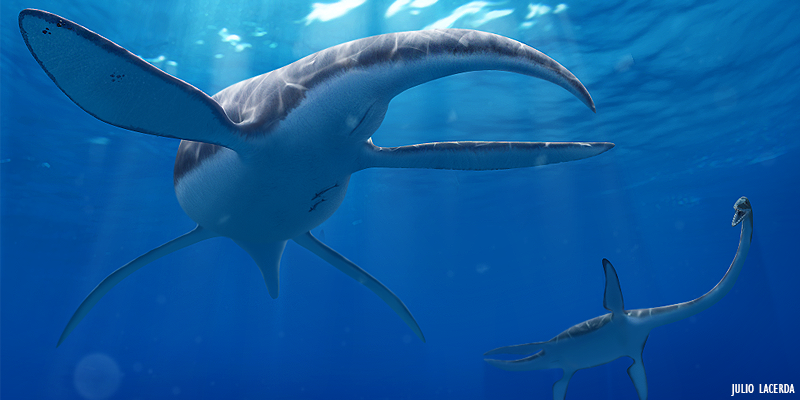 Not every extinct reptile is a dinosaur

All Posts
It’s dead, it’s a –saur, it’s a dinosaur. Or is it? An extinct animal’s true identity is not always what it says on the tin. Without understanding the basic relationship between extinct reptiles, it’s easy to fall prey to the false impression their names bring.

For more than 150 years, dinosaurs have played a notable part in popular culture. From Crystal Palace Park’s sculptures to The Lost World and the downright fictional Godzilla, the beasts evoked a sense of awe comparable to that of dragons in medieval lore. Nowadays, major franchises that feature animals and creatures feel incomplete without dinosaurs or dinosaur look-alikes. As they penetrate deeper into the entertainment business, more dinosaurs are discovered by palaeontologists and adapted to our contemporary bestiary. Commonly, various non-dinosaurian extinct creatures also share the same stage, lumped together with and marketed as dinosaurs to the disgruntled groans of paleonerds worldwide. To clear the misconception, we need to first figure out — what is a dinosaur?

Dinosauria is a term coined by Richard Owen in 1842 to refer to three extinct creatures he thought belonged to a previously undescribed category of animals: Iguanodon, Megalosaurus, and Hylaeosaurus. Although the word itself is a combination of the Greek word deinos (terrible) and sauros (lizard), dinosaurs aren’t closely related to lizards — something that Owen wasn’t aware of at the time. In fact, early reconstructions of Iguanodon depicted the animal as a super-sized iguana, hence its name, ”iguana tooth”. Unfortunately, the convention of scientific naming states that names are not to be changed unless the species is transferred to a different genus, and thus we are left with plenty of misleading, confusing names that scientists assigned them before their true identity was unmasked.

Now that we are aware of what dinosaur means, it’s time to dig into the basic classification of dinosaurs. In 1888, Harry Seeley classified dinosaurs into two distinctive groups based on the shape of their hips. One is called Ornithischia (bird-hipped), and the other Saurischia (lizard-hipped). 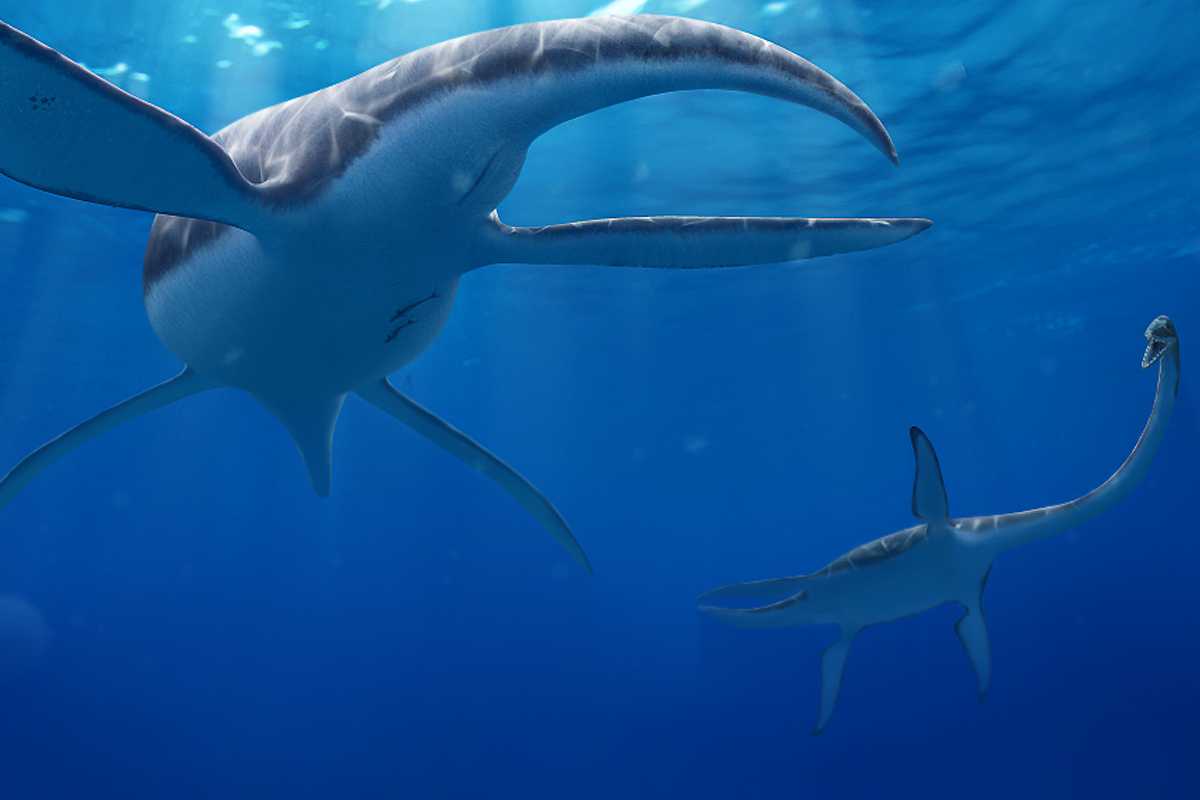 Plesiosaurs
Two plesiosaurs about to settle their differences.
Julio Lacerda 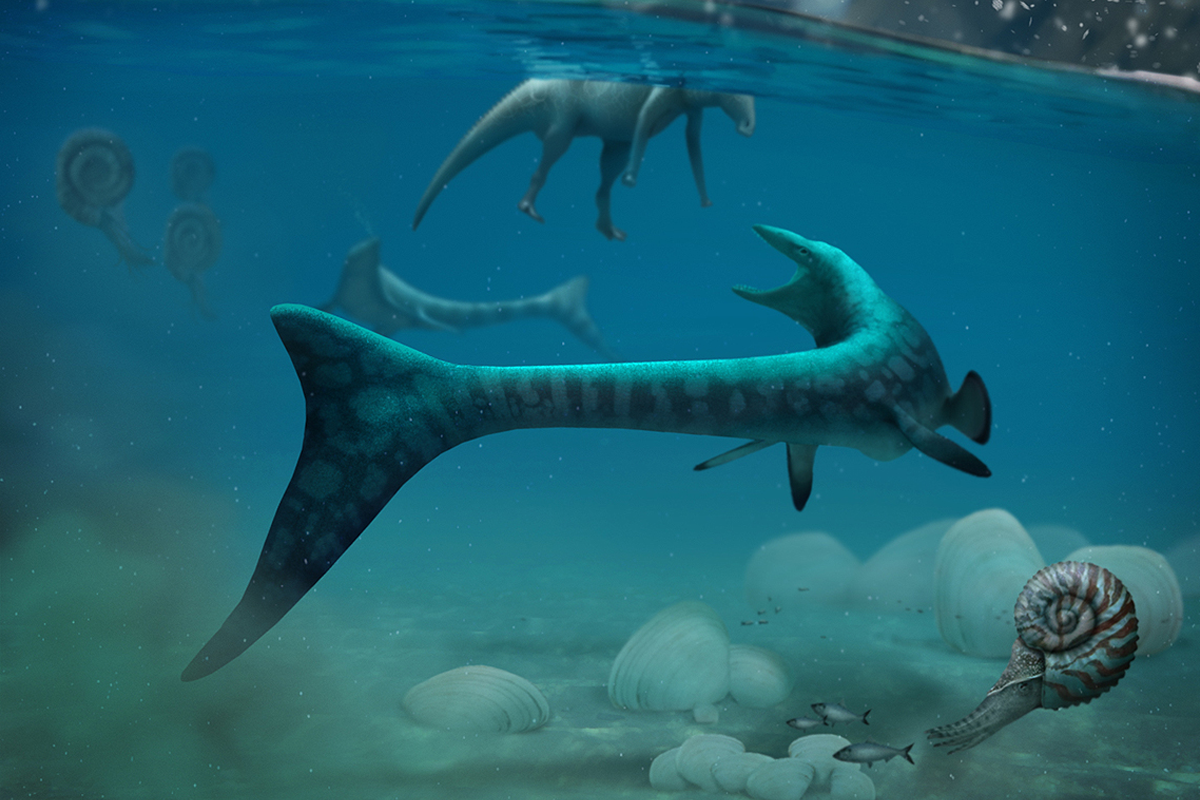 Mosasaurs
A pair of Tylosaurus, a kind of mosasaur, circling around a drowned dinosaur carcass.
Julio Lacerda 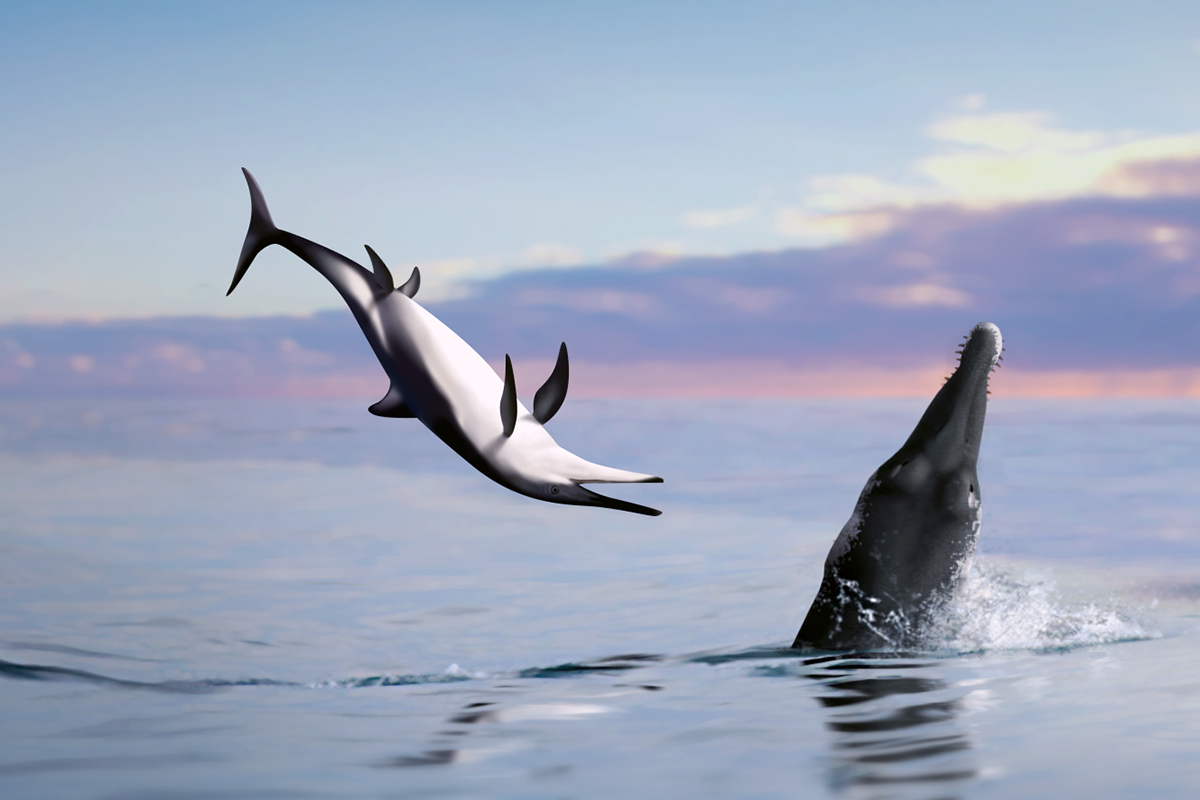 The beaked, exclusively herbivorous Ornithischia is further divided into three big groups. The armored Ankylosaurus and plate-laden Stegosaurus are collectively called Thyreophora (shield bearers); Triceratops and other horned ceratopsians alongside their close relative, the thick-headed Pachycephalosaurus, fall under Marginocephalia (fringed heads); and the final one called Ornithopoda (bird feet) is comprised of large herbivores which lived in big herds, like Iguanodon, Maiasaura, and Parasaurolophus.

Meanwhile, the lizard-hipped Saurischia can be split up into Sauropodomorpha and Theropoda. The mouthful Sauropodomorpha is known for long-necked, thundering giants such as Diplodocus and Brachiosaurus; while the bipedal, mostly carnivorous Theropoda contains the Hollywood stars Tyrannosaurus, Spinosaurus, Velociraptor, and ironically, birds. At this point it is clear that human-assigned names are not a very good indicator of an animal’s place in the evolutionary tree. 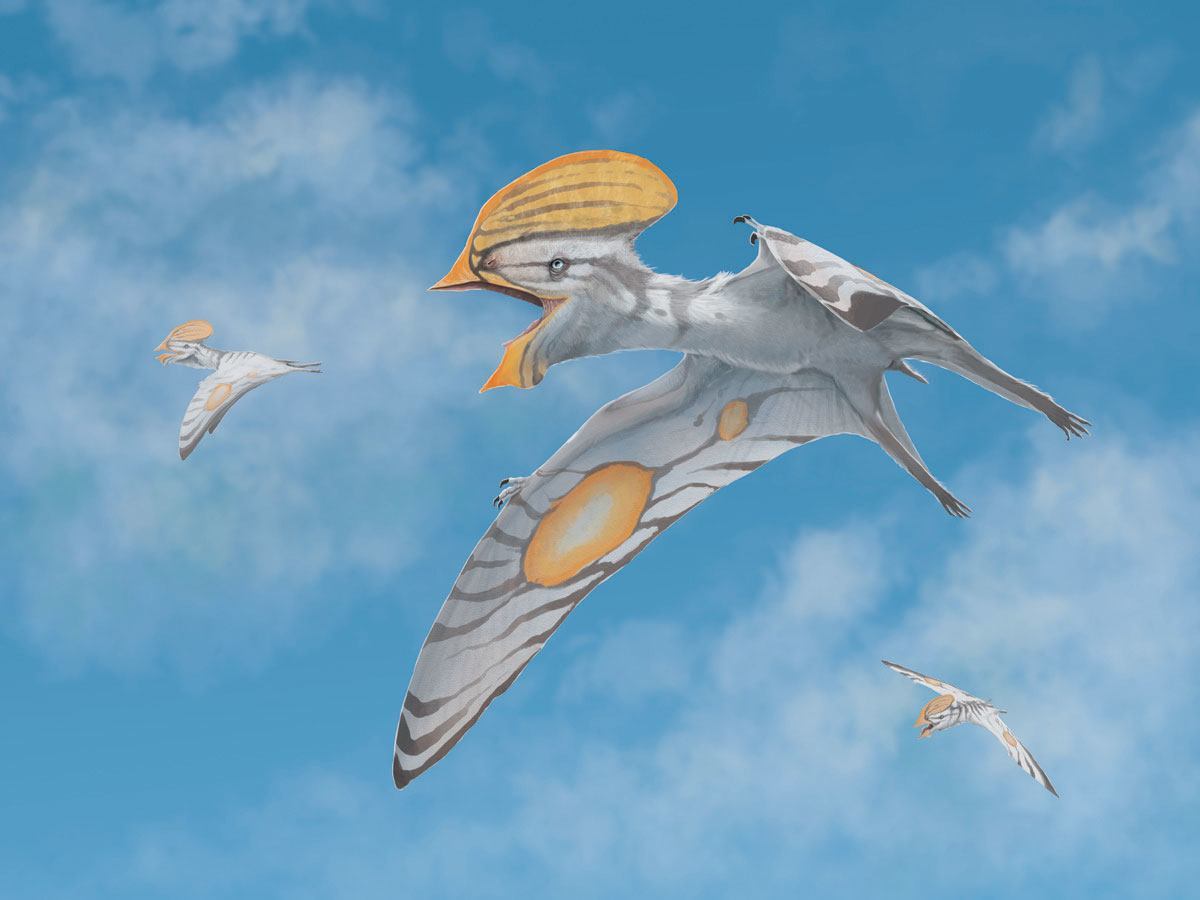 But what about the flying dinosaurs and marine dinosaurs? Where do they belong in the tree of life? It turns out, while birds are the true flying dinosaurs, all the other popular –saurs that come to people’s minds are not even a member of Dinosauria at all.

Pterodactylus, the first flying reptile fossil to be discovered, belongs to a larger group called Pterosauria (winged lizard). These close cousins of dinosaurs were the first vertebrates that took to the sky long before the birds. Pteranodon, arguably the most recognizable member of this bunch, was a marine flier with a 7m (23ft) wingspan that soared across waters like seabirds, but some smaller pterosaurs like Sordes were parrot-sized and likely fed on insects. Pterodaustro, with its bristle-like modified teeth that superficially resembled a whale’s baleen hair, was probably a filter feeder which waded in shallow waters. Just before they went extinct alongside most dinosaurs, some pterosaurs known as azhdarchids grew to gigantic proportions, giving us the giraffe-sized Quetzalcoatlus which preferred to hunt on four limbs despite its enormous 11m (36 ft) wingspan. “Pterodactyl, the flying dinosaur” is a misleading, over-generalized remark which undermines their diversity throughout the ages. 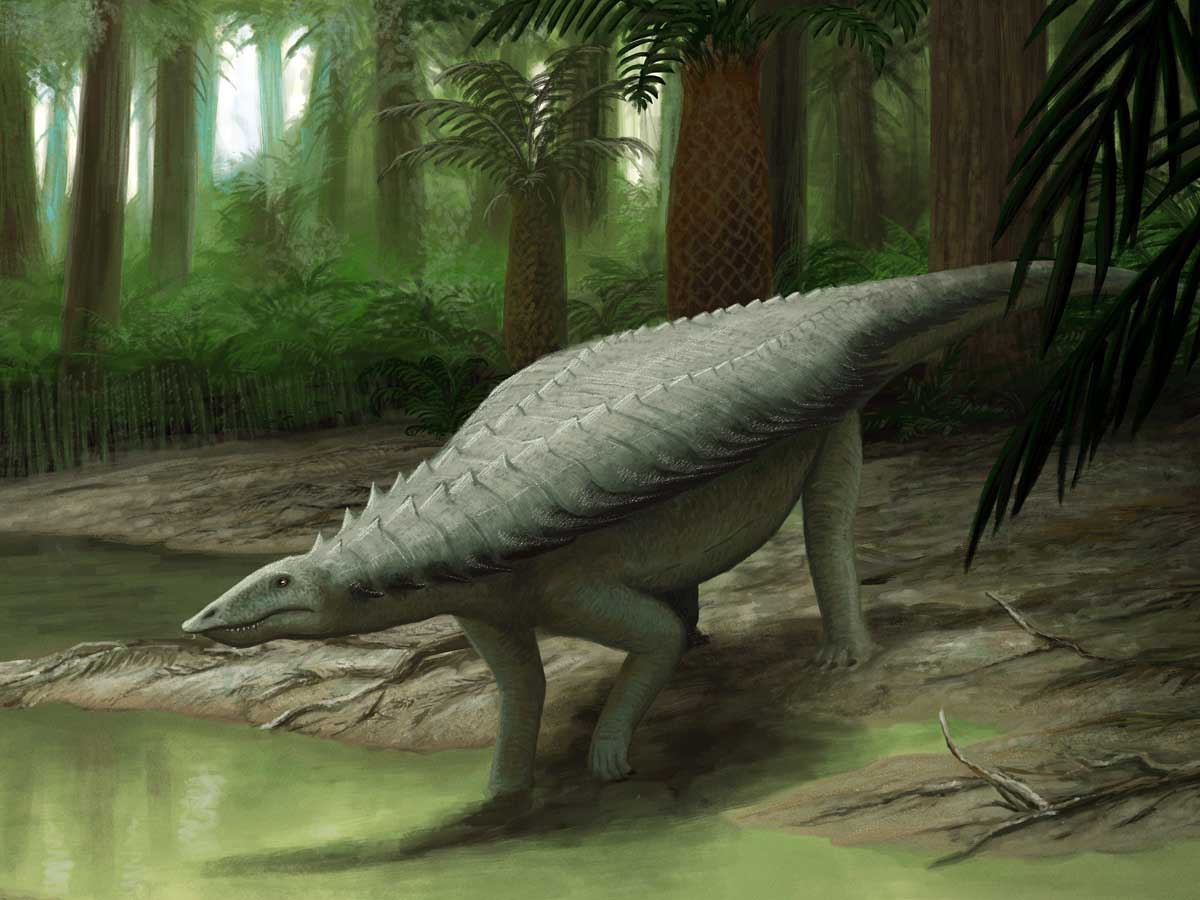 The next closest relative to dinosaurs and pterosaurs are crocodiles and their early relatives, sorted under the name Pseudosuchia (false crocodiles). One notable subgroup of early crocodile-relatives, Aetosauria (eagle lizard), were heavy armored terrestrial animals which mostly ate ferns. Desmatosuchus, discovered in late 19th century, is a relatively well known member of this obscure group, while Gorgetosuchus is one of the latest additions to the clan. Dinosauria, Pterosauria, and Pseudosuchia together make up the larger group called Archosauria. Birds and crocodiles are the only archosaurs still living in the present day.

Plesiosauria, a group of long necked marine reptiles popularized by the cryptid Loch Ness Monster, were among the earliest fossils discovered by palaeontologists. These successful marine predators descended from the Triassic era nothosaurs, which had feet instead of flippers, and lived on the shores similar to modern day seals. One particular specimen of plesiosaur dubbed Albertonectes reached an impressive total length of over 11m (36 ft), with its neck alone claiming 7m (23 ft) of said measurement. Latest studies suggested that plesiosaurs’ closest living relatives are turtles, and clump them together as Pantestudines—a sister group of Archosauria. The name Plesiosauria itself comes from the Greek word plesios (near to), which refers to its body shape which more closely resembles extant lizards than the other kind of marine reptiles unearthed in early 19th century, the ichthyosaurs. 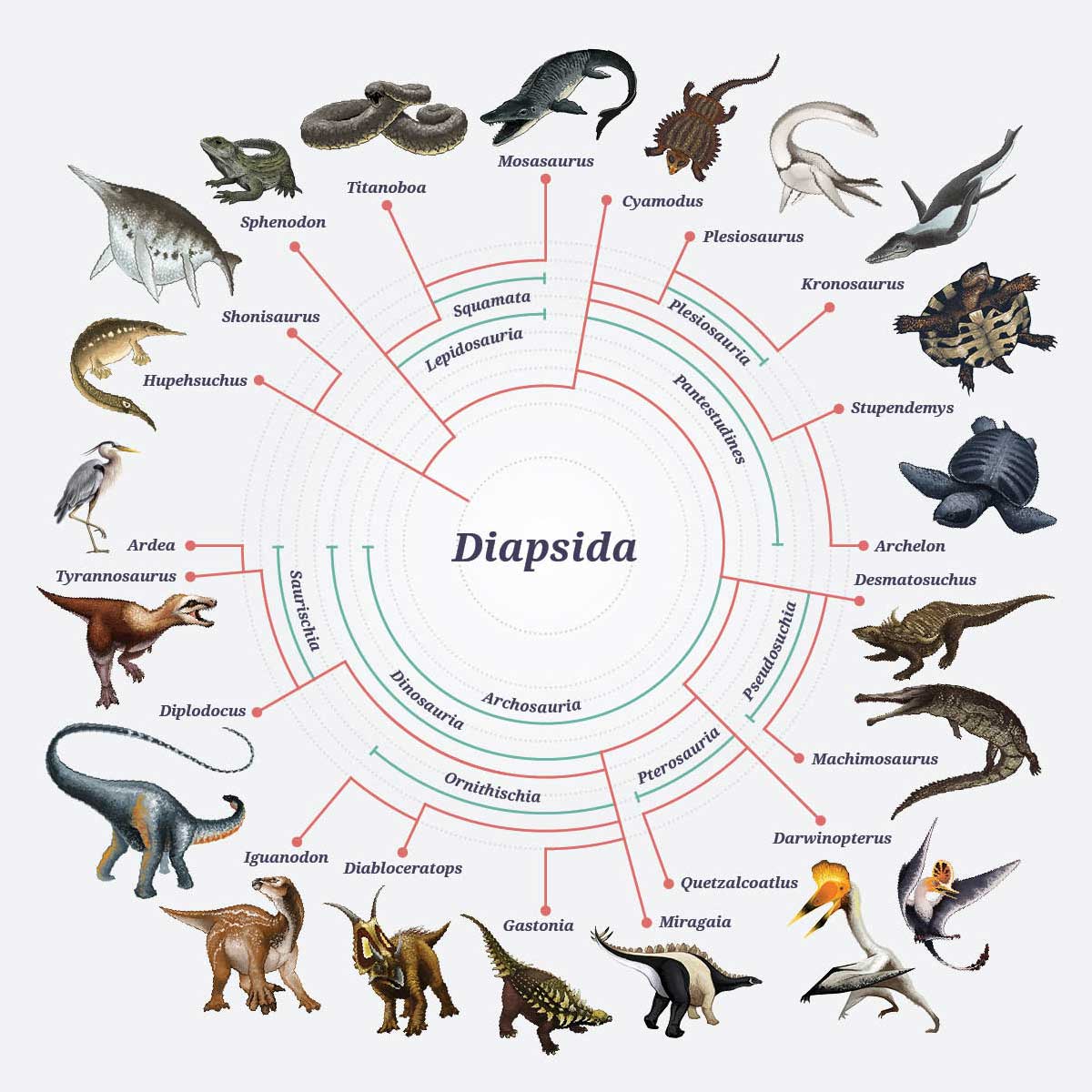 Although ichthyosaur remains had been discovered one century prior, a complete skeleton was never found until 1812 when the teenage Mary Anning—who later became a celebrated paleontologist for her discovery of plesiosaur and ichthyosaur fossils—found a torso to match the skeleton her brother discovered the previous year. Within the next following decades, Ichthyosauria (fish lizards) became a fashionable subject for British paleontologists and thousands of specimens were collected, classified into dozens of new genera. This lineage of fish-like reptiles seemed to flourish, dominating the Triassic oceans, producing various shapes and sizes. Shastasaurus, for example, went to become the largest marine reptile discovered to date at 21m (69 ft), while the Jurassic Ophthalmosaurus developed a pair of eyes nearly as large as its entire skull. Despite the diversity, however, very little is known about the origin and evolutionary history of the group, and their exact place in the evolutionary tree is uncertain.

The last -saur which recently rose to international fame is the mosasaur. Mosasauroidea (Meuse River lizard), defying the half article-long tradition of scientific verbal misconception, is an actual superfamily of aquatic lizards which fall under the extensive order of Squamata—which encompasses all modern lizards including geckos, iguanas, chameleons, and snakes. While mosasaurs never diversified as much as the rest, the largest of their kind such as Tylosaurus and Mosasaurus grew bigger than 10m (33 ft) and became the apex predators of their time. Although recent researches suggested that mosasaurs might be related to monitor lizards, their relationship with other squamates is still considered unresolved. At the very least, enthusiasts all over the internet can now breathe a sigh of relief, knowing one final group of –saur is an aptly named bunch of lizards.